Hotel accommodation near Vientiane's Mekong River, architecturally is a mix of Asian, colonial French and modern western. Travel to Vientiane is usually via Wattay International Airport near the Mekong River and close to the Vientiane central business district or via the Thai Lao Friendship Bridge across the Mekong River from the city of Nong Khai in the province of "Nong Khai" Thailand which is 20km from Vientiane's CBD.

Accommodation close Vientiane's CBD with internet, 80 TV channels, 4G mobile network, restaurants (or near restaurants) and swimming pools are common. More 4 and 5 star hotels in Vientiane being are being built every time I visit this booming city in central South East Asia. Laos is develping quickly and being a member of ASEAN and recipient of foreign aid, conference hotels are booked well in advance.  Cheap home stay style guest houses are also near Vientiane's CBD and Mekong River.

Early in the monsoon season the Mekong River near Vientiane is so low that trucks drive halfway out into the Mekong from the Lao side to cart sand for building materials in Vientiane.

Language spoken in Vientiane is Lao, Laotian, (Lothian). It is a form of Isaan (Isan, Esaan) which is widely spoken in nearby northeast Thailand.

Tourist visa upon arrival at Wattay Airport costs about $40. Prices vary according to nationality.

Click information link above on how to apply for Thai visa renewal or Thai visa extentions at the Thai embassy in Vientiane.

THINGS TO DO IN VIENTIANE

A must visit to the Lao War Museum in Vientiane will confirm that Laos is a communist country. The Lao War Museum is large and full of many interesting Vietnam war exhibits. More bombs were dropped on the Plain of Jars and on the Ho Chi Minh Trail in Laos than all of bombs of WWII. We saw the war museum with a mechanic from Kalgoorlie who's working near the Ho Chi Minh Trail. He's seen many huge craters and daily there are finds of unexploded bombs near the Australian copper/gold mine near the Vietnamese boarder with Laos. Eye candy in uniform are female military War Museum attendants. The chorus "women in uniform" kept ringing in my head.

Swim and enjoy the cool jungle environment of waterfalls near the Mekong River near Vientiane. The videos below were filmed 18km, up the Mekong from Wattay international airport near the Vientiane CBD. You'll need your passport to cross the Mekong River into Thailand to get to these beautiful waterfalls.

Get a cheap $10 massage in Vientiane.

Visit the local Vientane markets. The bustling market is a very interesting eye openner as to how Isaan people of Vientiene shop, prepare food, do business and see unusual foods. There's the tourist evening markets near the Mekong and there's the peoples market near the main Vientiane bus terminal.

Since the Pathet Lao communists took control at the end of the  Vietnam War, Laos is a communist country, though there is some disagreement of this term. Officially the "People's Democratic Republic of Lao" PDRL or Laos (as the west terms the country name), does not give the impression of equality of all it's people. Booming Vientiane, with new hotel accommodation developments, advertising billboards of many western brands, mostly imported from China, grand buildings, luxury hotels, casino and luxury cars are everywhere. Cheap compact four door, left hand side drive sedans cost about $9,000. GDP is about US$1,700. Wealth in Vientiane is offset by poverty in provinces. Many petrol stations in Vientiane are Vietnamese. 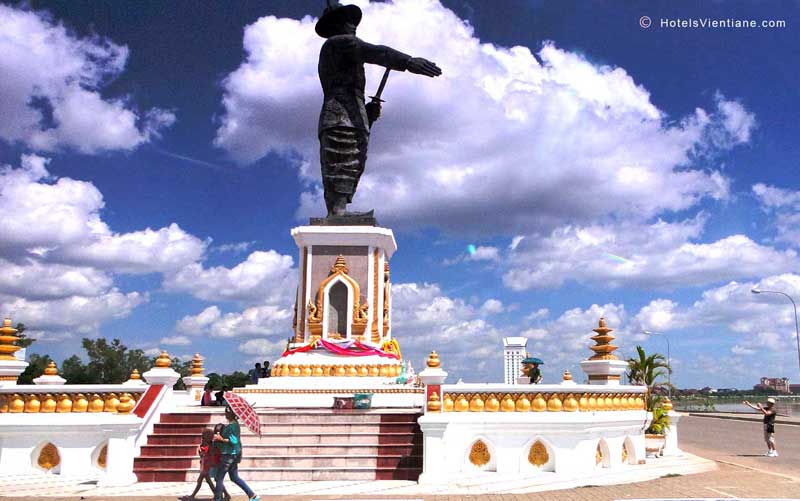 Large statue near the Mekong River of a 17th century Lao King who defeated Thai armies to keep Laos independent till French rule.

Bars and Restaurants Near Vientiane

Restaurants near the centre of Vientiane dish up good food but as in most capital cities, is double the price of restaurant food on the other side of the nearby Mekong River in Si Chiang Mai.

A legacy of the Vietnam war was displacement of many Laotian families. One of the pleasures of life is giving. I gave 5 years in the prime of my life as an Australian Volunteer Abroad. A poor but great experience. Try spending a time visiting orphanages near Vientianne. Check out accommodation and other facilities. Interact with orphans near Vientiane. You'll be inspired by the children of Vientiane. 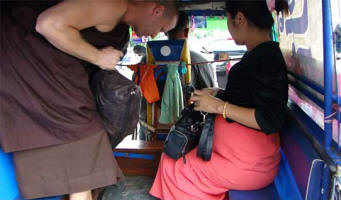 Near Vientiane I met a Buddhist monk from Perth Australia. We travelled over Friendship Bridge by bus into Thailand and then tuk-tuk to Nong Khai border town. Gavin gave up a well paid boilder maker job in Australia to do volunteer welding work at his forest monastery retreat in Thailand. Buddhist monks there provide retreat accommodation and therapy for drug addicts.  Gavin hopes to set-up similar retreat accommodation and therapy in Perth. Forest monks rarely travel and wear brown robes.

Photos of Accommodation Near Vientiane 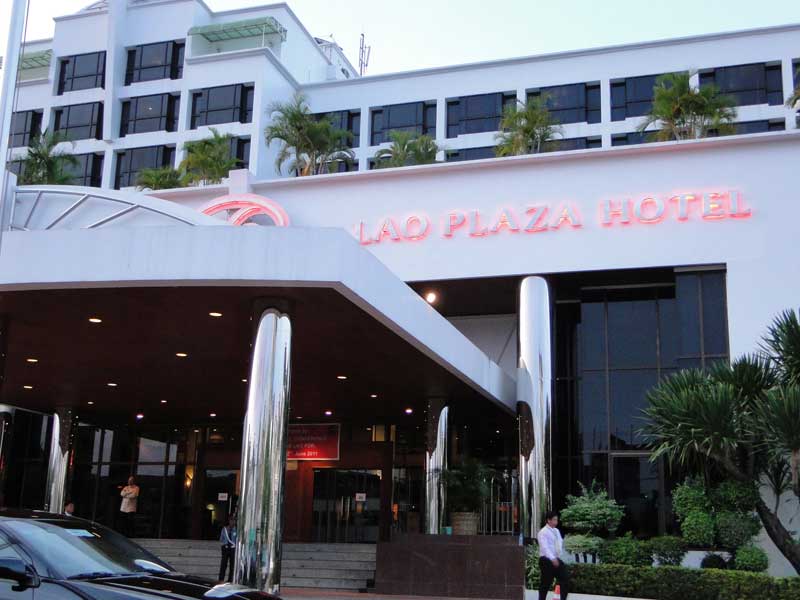 BOOK ACCOMMODATION NEAR HOTELS NEAR VIENTIANE